In the course of the current discussion on how we as a society want to implement the energy transition, deep geothermal energy is getting a lot of interest again in Germany. BVEG has created a detailed generic project plan for deep geothermal projects. The generic project plan “BVEG Leistungsspektrum” in all its detail – including partial steps including their crucial aspects and related ressources as well as project step timing - is available in German online at bveg.de. This document serves solely as an overview.

The Leistungsspektrum is intended to help those interested in deep geothermal projects to plan and implement the necessary steps in a timely manner.

It is therefore primarily aimed at the following players:

This guideline is intended to serve as a reference and merely presents a framework that still requires adaption for individual projects. It has been developed for a low-enthalpy, deep hydrothermal project in Germany, i.e. a heating or power plant project with several, 400 to several thousand meter deep boreholes. Similar applications such as heat storage or deep borehole heat exchangers and also the consumer side (e.g. district heating networks) are not considered here.

In the first phase, the course can already be set for the success or failure of the project. The preparation starts with a general interest about the project idea to preliminary studies and a very early effective public relations. It cannot be stated enough that public relations early on is a pre-requisite for a successful project.

For the interested doer of a geothermal project, a solid understanding of the geological framework with the associated opportunities and risks is essential. The geology then determines the energy generation plants in question in the further course and these are significantly involved in the possible economic framework conditions. For example, the possible generation of electricity depends on many parameters, e.g. temperature and possible flow rate.

The existence of possible consumers for electricity or heat is another important pre-requisite in the preparation of a deep geothermal project. For feeding electricity into public grids, it is advantageous if possible feeding points are in local proximity to the geothermal plant. For the use of generated heat, possible consumers such as larger densely populated residential areas, industrial plants or perhaps greenhouses for growing fruits or vegetables should be nearby.

The major risks and opportunities of the project must be realistically assessed, and mitigation measures should be evaluated at this stage. An overly optimistic view of the geological, technical and economic constraints has caused many a project to fail.

The Geothermal Information System GEOTIS offers a multitude of geological and geophysical data important for geothermal evaluation of the subsurface. It is available at www.geotis.de

Probably one of the most important milestones of a deep geothermal project is a secured funding. Successful financing requires quite a number of preliminary steps.

Exploration for geothermal energy requires a mining permit and, for actual extraction, an additional license. To obtain this, close coordination with the responsible mining authorities and ministries of economics is necessary.

A concept for the drilling and subsequent extraction should be drawn up at an early stage. One of the company’s first activities in phase 2 is therefore a feasibility study that evaluates these aspects of the project and also the heat utilization concept, as well as estimating temperatures and volume flows. For this purpose, an initial model will also be created to better understand the subsurface and identify data gaps in this regard.

For a meaningful evaluation, a detailed geological 3D model is important. Data and models for this can be obtained from third parties if necessary; however, an own seismic measurement campaign may also be necessary. For this, as well as for the subsequent drilling, a mining license is required. After all necessary preliminary investigations have been carried out, a POS (Probability-of-Success) study is usually necessary. This evaluates in great detail the risks and opportunities of the project in terms of geology and discovery.

The site planned for the project also requires a comprehensive suitability assessment. Parameters such as access roads, noise emissions, environmental issues, any necessary compensation areas and possible challenges with induced seismicity are just some of the issues to be considered. In most cases, a preliminary environmental impact assessment must also be carried out. Sufficient time must be planned for this.

With the knowledge gained from the successfully drilled wells and the subsequent circulation tests, the reservoir must be modeled and then simulated. This is necessary for the long-term operation of the deep geothermal project. It is also essential for the final dimensioning of the aboveground facilities.

Surface facilities must be tendered and selected and, of course, a license applied for. Then construction can begin. A seismic monitoring network is often necessary. This is used for early detection of seismic problems and documentation in the event of any damage.

Commissioning of the heat- or power plant is another significant milestone of the project. Especially if electricity is to be sold due to the subsidized payment via the EEG (Renewable Energy Sources Act), the year of commissioning can have a great impact on profitability.

The actual operation of a deep geothermal project is fairly unproblematic. But pitfalls may arise here as well, which can be prevented with an adequate quality management and accompanying precautionary maintenance planning.

Post-mining, i.e. the necessary measures and processes that have to be carried out after the end of operation of the deep geothermal project, should not be underestimated.

Before a decision is made to completely dismantle all underground and surface facilities, alternative reuse options should be evaluated.

If the well is actually to be plugged and abandoned and the well site dismantled, this work is also subject to an operating plan. The dismantling of the wellbores is subject to mining regulations, which must be strictly adhered to. The costs for this should already be taken into account during the early planning of the project and, of course, also during the funding phase of the project.

The dismantling of the surface facilities and well sites is one of the last steps before the operator can be released from mining supervision. 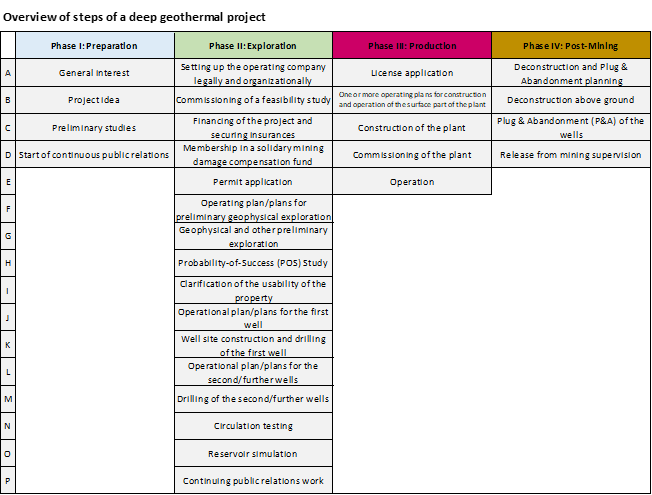 Overview of steps of a deep geothermal project © BVEG 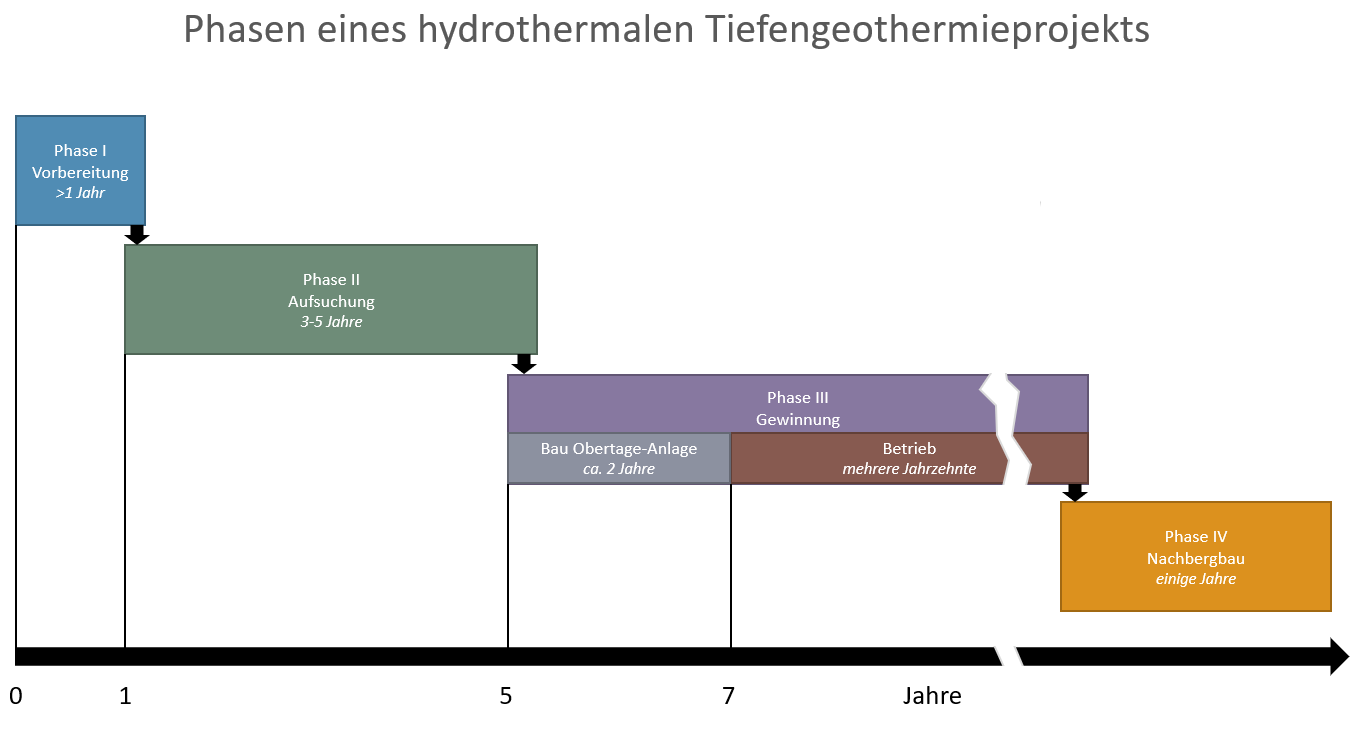